Most young people care deeply about environmental issues, and wish to make a positive change in the environment around them. The Green School Programme provides an ideal way for fostering environmental awareness in the entire school and it is an intrinsic part of the life and ethos of the Holy Family School.

Our school received its first green flag for reducing litter and waste in our school in May 2004.   We established a Green-school  committee which consisted of pupils, staff and parents. The committees first initiative was to encourage the pupils to use a lunchbox with a lid and to avoid using cling-film and aluminium foil. We also put in place a recycling bin for cardboard, wastepaper, newspaper and office paper; a recycling bin for batteries and collected old mobile phones to send to the Jack and Jill foundation.   In each classroom we have two bins: one for recycled paper, one for ordinary rubbish.   The Green-school representatives are assigned the job of giving a mark out of 10 to each class to encourage less waste. In those first two years we reduced our waste going to landfill by 70%.

We received our second green flag in 2006 for energy.   We focused on educating ourselves and others at home and in the community about energy saving.   We looked at various ways in which we could be more energy efficient in school and at home, such as keeping outside doors closed to keep the heat in, not leaving electrical equipment on standby, turning off lights and reducing the thermostat by a degree or two.

In school we encouraged the children in each classroom  to turn off the lights, to make sure that blinds and windows are closed and that all electrical equipment are powered off at the electrical sockets.   We reduced our energy usage by 20%.

The next flag we were awarded was for water.   Again, as in previous years, the Green-school  committee set out targets at the beginning of the year.   We ran various events to increase the pupils, staff  and parents awareness on our green theme.   Events included poetry and art competitions, action days, visits from outside agencies and drama groups.   We learned about water saving in class and highlighted people’s use of water in the home encouraging them to reuse water for gardening and to take showers instead of baths.

The fourth theme we worked on was travel.   All children were encouraged to walk, cycle, park  ‘n stride, carpool or take the bus to school.   We put in place various initiatives to encourage the children.   All the children who took part were given a high visibility jacket to wear to school so that they could be seen by cars on the road.   We ran workshops on safe cycling skills on  the road and installed a new bicycle shelter on our school grounds.

We had a  w.o.t day which stands for walk on Tuesday.   The green school committee would record in each class the number of children who had walked, cycled or taken the bus to school.   The winning class were awarded a homework pass.

Holy Family School received their 5th International Green Flag Award (Bio Diversity Theme).  They were presented with the Green Flag by An Taisce on 26th May at the Silver Springs Hotel, Cork.  A special word of congratulations to Mrs. Carmody, Green Schools’ co-ordinator and her Green Schools’ Committee for their hard work and dedication! 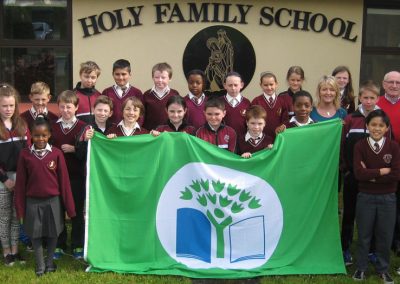 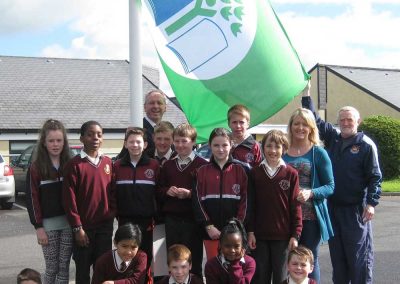 Congratulations to our pupils and school community on achieving our latest Green-Schools flag! The Green Flag was presented to our school by An Taisce on May 3rd at the Radisson Blu, Cork.  Only 4 people from each school could attend the presentation- Leah Ann Culloty and Dylan Arellano were our representatives on the day. 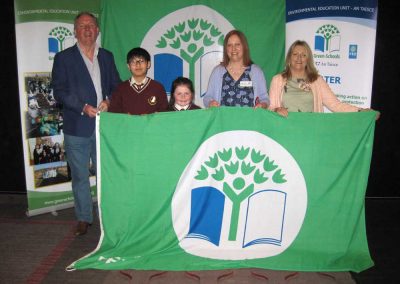 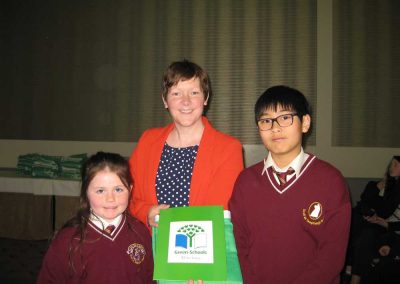 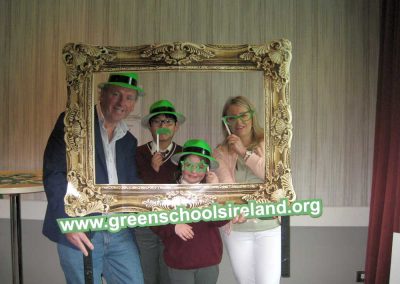